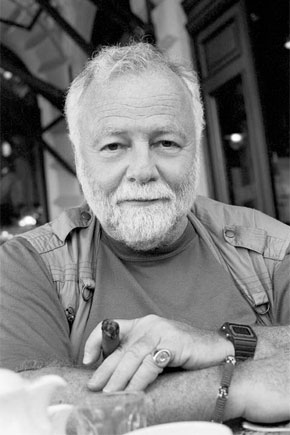 When I look at the people I photograph, I see that they have a larger vision of life, a vision that transcends monetary wealth. It is about their relationship with their god, with their land, neighbors, and family. It is the power of those relationships that I want to communicate.

Fredric Roberts is an award-winning photographer based in Los Angeles. His work has been exhibited in solo shows at the United Nations General Assembly, The Rubin Museum of Art, the Museum of Photographic Arts, the City of Ontario Museum of History and Art, Yale University, Stonybrook University, Lehigh University and the San Diego International Airport.

In 2000, Fred retired from a distinguished 30-year career in the finance industry. In 1980, he established F.M. Roberts & Company, a Los Angeles-based investment banking company. In 1993, he served as Chairman of the Board of Governors of the National Association of Securities Dealers (NASD), which then owned and operated the Nasdaq Stock Market. He later served as a member of the Nasdaq Board of Directors and its Executive Committee, Chairman of the NASD’s Corporate Financing and Strategic Planning Committees, the Nasdaq Marketing Committee, and the National Nominating, Rate Formulation and Listing Qualifications Committees. Recently, he was a Director, and former Chairman of the Board, of Cost Plus, Inc., a leading specialty retailer of casual home furnishings and entertaining products.

In January 2011, he established the first Fredric Roberts Photography Workshop in Udaipur, India, and recently embarked on a continuation of these workshops across the world. The first of these took place in Bhutan in January 2014, followed by a second workshop in Nicaragua in May 2014.

Fred Roberts is a graduate of Yale University and The Hill School and is an active member of the business and cultural communities in Los Angeles. He is an Emeritus Member of the Board of Directors of the Los Angeles Music Center. He is also Chairman Emeritus of the Music Center’s Leadership Council and Founding Chairman of the Spotlight Awards Scholarship Program. He has been a frequent lecturer for the John E. Anderson Graduate School of Management at UCLA and the Young Presidents’ Organization, and has written several articles on corporate finance for Chief Executive Magazine. He is the former Cellar Master of the Los Angeles chapter of the Commanderie de Bordeaux and past President of the Los Angeles Chamber Orchestra.

His work is in the collections and/or represented by the following institutions in the United States and around the world:

Fred has received widespread recognition for his work: